Adam Levine has become quite the hot topic on the internet. Multiple people have claimed that the Maroon 5 singer sent inappropriate messages to them and that he had an affair with his wife. Now, YouTube star Tana Mongeau even claims the singer slid into her DMs.

If you are not caught up with everything that is the entire Adam Levine saga, here is the lowdown before we even tell you about the latest news.

This all started on September 19th when a viral TikTok video came out from Instagram model Sumner Stroh. The woman said she was coming forward with the story after a trusted friend was going to attempt to sell it to a tabloid magazine. This video has more than 20 million views.

embarrassed I was involved w a man with this utter lack of remorse and respect. #greenscreen

While sharing this, the model admitted that Adam Levine stated that he basically wanted to name his unborn child after her…

In other messages you can see text like “It is truly unreal how f***ing hot you are. Like it blows my mind” from the singer.

The model claims that she was young and reckless at the time and she also felt completely manipulated throughout this one and a half year affair.

After getting a lot of backlash online for playing the victim card, Stroh made a follow up video. She believed that the singer was actually separating from his wife and falls on the fact that she was new to LA. Stroh thought that Levine was trying to keep things under wraps from the press and believed him.

In a now deleted video, a woman has come forward stating that she also received inappropriate messages from the singer and wanted justice for the wife.

The model didn’t want to share more explicit messages but we can see Adam state things like “I shouldn’t be talking to you you know right?”

After all was said and done, Levine denied the allegations in an Instagram story saying that no affair had happened but he is taking full responsibility. “I did not have an affair, nevertheless, I crossed the line during a regrettable period in my life.” 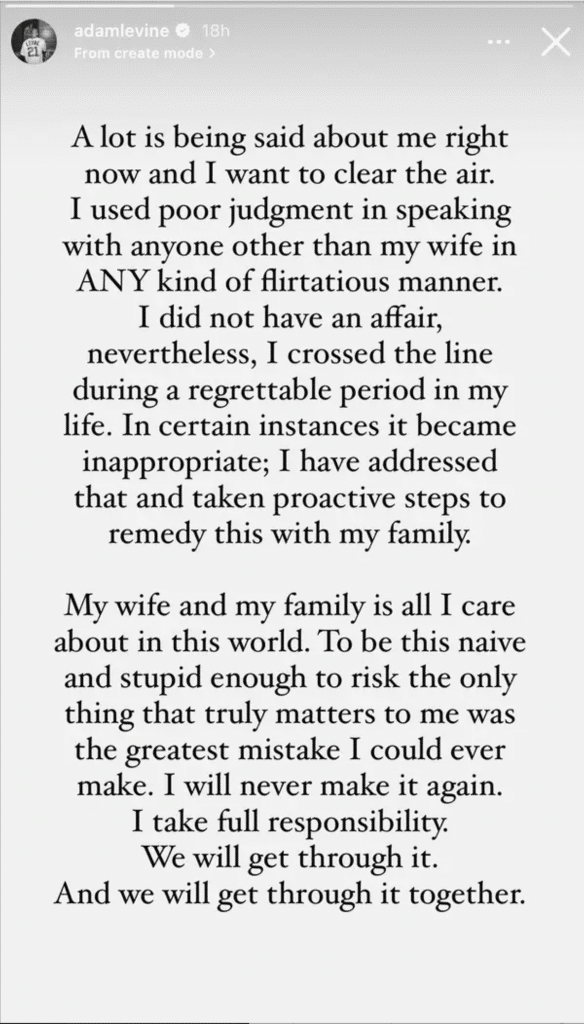 After the “apology” we received one other woman named Maryka who came forward with videos of Adam Levine flirting with her.

In one of the messages that quickly appeared on screen Maryka stated “ Dude aren’t you like married lol?” To which he responded with “Yeah, but it’s complicated.”

A fourth woman has come forward who even worked for Lavine between 2007 – 2010 where she got an inappropriate message from the singer.

She claims she got a message saying Levine wanted to spend the day with her naked. When she asked if the message was meant for his girlfriend at the time, Levine didn’t respond. He later fired her from his tour and started ignoring her.

Did Tana Mongeau Get Messages from the Singer?

And now Tana Mongeau claims she also got messages?

check this one out … he said unsend pic.twitter.com/Q0B2Svh4Kl

The YouTuber stated that she got messages from the singer but there is nothing in the chat. She wrote “check this out out… he said unsend.” Some people believe that this could actually be a real message as it asks to accept it in her inbox.

Taylor Swift is Not Performing the Super Bowl LVII Show

Torrid’s Y2K Line Criticized for Not Using Bigger Plus Size

The Internet Answers Some of the Burning Questions from the